It is certainly true that there ARE groups in the military that not only put in significant practice with pistols, but are demonstrated high-level experts in their use.  However, those groups are very specific and well-known, and contain a very small number of troops, for only a tiny percentage of the military as a whole.

As such, the comment of “I was in the military” is meaningless in terms of being any sort of indicator of pistol proficiency.  It is similar to saying “I’ve been a hunter for 20 years” — the information given doesn’t tell you anything about the person’s pistol skill level.

There are certainly military folks who are exceedingly skilled with pistols.  However, the vast majority of them didn’t get to that level because of the fact that they were in the military–they got there because they liked shooting pistols, and got as much training and practice as they could elsewhere.  (Again, outside of those few small groups that specialize in missions that require high-level pistol use.)

But what if someone qualified as “expert” in their branch of the military?  Recently, I was in a discussion where one person mentioned that their friend was really good, and his opinions about pistols (and defensive pistol tactics) should be believed because he had rated Expert in the Marines.

I didn’t actually know what that meant, so I looked it up—the Marine Pistol Qualification is available online, and you can take a look at its requirements.  It looked fun to shoot, so I decided to try it one day.  (Good article about the qualification and its history here:  Shooting the USMC Pistol Qualification: Combat Pistol Program (CPP).)

Important thing: I didn’t have any of the official targets. Official MPMS targets are 19.5 inches by 40 inches, and look like the graphic to the right.

Since I didn’t have any of these targets, I instead copied a graphic of part of the target, that could fit on two 8.5 inch x 11 inch pieces of printer paper.  It meant that when I was shooting I’d literally not have much of the target to shoot at (compared to the total), but I would have all of the 10-zone, all of the head, and part of the 8-zone around the chest 10-zone. 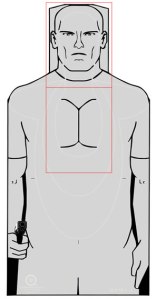 The parts I copied are shown by the red boxes on this second graphic. Like I said, most of the target wasn’t going to be available to me, but that was okay. It gave me all of the top scoring zone as a target area, and I made sure that the sizes of my targets matched the size of the actual targets exactly.

The qualification is 40 rounds, with twelve rounds taken from the 7, twelve from the 15, and the last eight from the 25.  Each shot is worth a maximum of 10 points, for a total possible of 400.  Each string of fire had a par time.  Strings included drawing from the holster, shooting controlled pairs, emergency reloads, and precision shooting from the 25-yard line.

To rate “expert” you have to get at least 364 points.  In other words, you can only drop 36 points–less than one point per round.

Here’s what it looked like when I shot it:

So, my thoughts about the qualification itself…

The author of the article where I got the information about the qualification said that he thought the 10-zones were small, and that shooting this double-action from a retention holster with the safety on made the par times reasonable.  I personally disagree, because my draw time (from an ALS holster with a SLS hood) just isn’t that much slower than my concealment draw (that ALS is a great holster) and don’t they use their thumb to click the safety off as they get their initial grip on the gun?

I do certainly agree that this qualification seems much more appropriate to the needs of Marines than the old version.  If a Marine (outside of a specialty that uses a pistol on a regular basis) has a need for a pistol, that means things have gone VERY wrong and the action is both close and immediate.  While this qualification is very basic, in my opinion, it has a MUCH better grasp of important skills needed than the old qualification did, other than there really is no emphasis whatsoever on time.  Yes, there were par times.  But….

…when I shot this, I wasn’t in any particular hurry, since I knew the par times were really generous.  As such, the times you see in the video were what you’d expect when I was relaxing and simply taking plenty of time to relax and aim.  And yet…I still shot the entire thing in less than 40% of the par time allotted.  During most of the qualification, I shot it in a bit less than half the time.  (I shot the 25-yard line section in one-quarter of the time allotted.)  In other words—the par time isn’t a factor in how people do on this qualification, or at least it shouldn’t be.  (If it takes someone 5 seconds to draw and fire two rounds center-mass at the 7 yard line, there’s a problem.)

Overall, regarding the comment that someone who rated Expert in the Marine Pistol Qualification is an advanced shooter?  I’m afraid I disagree.  They MAY be an advanced shooter (just like any given military person may be an advanced pistol shooter) but in my opinion, the Marine Pistol Qualification, at Expert level, is simply a decent test of the basic fundamentals of pistol shooting.  Someone with solid fundamentals (in a bullseye fashion) should attain an expert rating.   Claiming more than solid fundamentals–is going to take more than that.

Similar to how saying “I was in the military” is not a meaningful phrase when attempting to justify someone as an advanced pistol shooter, saying “I rated Expert at the Marine Pistol Qualification” does not mean anything other than at one time, the person speaking had a solid grasp of the fundamentals of pistol shooting.