I recently participated in a discussion regarding gun defenses, which started from a video by Polenar Tactical regarding how little it takes to cause a handgun’s slide to not function correctly.  It surprised me that many people didn’t know how easy it is to cause the slide of a semi-auto to not cycle correctly.  Merely putting a thumb on the rear of the slide is enough to stop the slide, and no, it doesn’t hurt your hand at all.

It led into a discussion about (after off-lining the gun) what to do when defending against a firearm:  perform a disarm at distance, use the body to control the gun, or enter while jamming.  For awhile at the beginning, there was some discussion as we all attempted to make sure we understood exactly what the other person meant by phrases like “jam the gun” or “use the body to control the gun.”  (Which was good, actually, because sometimes in discussions like that people don’t bother to make sure they are all talking about the same thing, and it goes downhill from there.)

It caught my attention a bit during the discussion about whether or not it was a good idea to close with the attacker and jam the gun, primarily because in my experience (which is limited to observations of training and force-on-force evolutions, not people actually being shot because having a large amount of experience at this is something I don’t want to gather) whether or not the defender should close is often highly based on the relative sizes of the attacker and defender.

Another way of saying that is if the attacker is bigger than you, closing with him isn’t a good idea unless you have no other choice.

Now–opinions vary on this.  Other people in the discussion had closing/jamming being their primary reaction.  (My response was “I bet you are a pretty big guy” because that would be an excellent choice for a big guy, though not necessarily for others.)

Here’s a little video showing the various conceptual choices you have regarding gun defenses.  In general, you can offline the gun and move outside, move inside, or you can offline the gun upward.  After that, you can perform a disarm/attack at distance, you can use your body to control the gun at distance, or you can close/jam the attacker.  Effectively, pretty much every gun defense (that doesn’t include weapons) is one of those things.

The video doesn’t include what to do after those points, and it definitely doesn’t include information about how to offline the gun in the first place.  You want to know how to get the attacker to miss the fact that you are removing yourself from harm’s way?  How to mis-align the attacker’s weapon so you don’t get shot?  Take a class.  Making it clear how to do that in public seems a great way to educate attackers, and I don’t really see a need for that.

The point of the video is to understand the common choices of entry, and then the pros and cons of the various followup ideas that are possible from that point–and there are certainly strengths and weaknesses for each.

In the video, I didn’t discuss at all what you can do with weapons of your own–such as having a gun and the ability to draw it quickly one handed for close-range shooting or having a quick-access blade for close-quarter work–because that changes things significantly.  It doesn’t make “not getting shot immediately” any easier, nor does it automatically make you safe or let you “win” if you think about it in that fashion.

But it does give you more choices.  For example, if you are moving in close to jam the gun, stopping the other person quickly isn’t easy to do, and you BOTH are effectively equal in terms of capabilities at that range, depending on your relative size.  If, however, you have a knife in hand, ANY strike you do can be significant. (That isn’t the same as debilitating, though.) Similarly, if you are able to jam the other person and simultaneously draw your own firearm and place shots into the attacker, that’s a big deal.

In those last two cases, size isn’t nearly as important a factor as it would be if you didn’t have a self-defense tool (read:  weapon) available to you.

There’s a lot of gun disarm/gun defense videos out there.  Many are pretty cool looking, some have solid technique.  Unfortunately, many are also pure nonsense in terms of actual effectiveness, much of which is because the technique itself is Hollywood-style crap that looks good but only works against someone who isn’t actually resisting.

When looking at gun defenses, bear in mind:

Take this picture shown below, for example.  This is a promo picture from a certain training school/organization specifically for a gun defense seminar–and yet, looking at it (as a static picture, maybe a video would be better but I doubt it) it seems to violate several important things.  The direction of the gun is not controlled–the attacker can turn their wrist fairly easily as you can’t clamp very hard that way.  If the elbow strike by the defender is not significant, then the attacker is not particularly off-balance and the situation will effectively be on an even footing–except he has a gun that you don’t control, and he does. 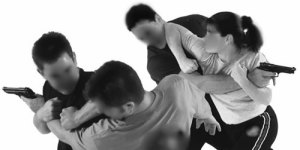 What is stopping the attacker from simply turning his hand and shooting you? Even by mistake?

I realize that the picture makes it look as it the attackers are off-balance, but that is completely a function of the elbow strike.  If the elbow strike doesn’t work, is blocked, jammed, or off-target, the off-balance will not happen from that technique.  Stepping in, binding the arm but not the weapon, and relying on a striking technique to stop the attacker sufficiently so that even by mistake he doesn’t turn the gun into you and fire is just NOT A GOOD IDEA.

How about this picture? 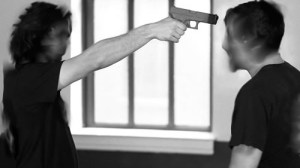 Oddly enough, even though this picture by itself contains much contrived “let’s make it easy on the instructor by being completely non-realistic” derp, the YouTube video it comes from is actually not bad, and is one of the few I’ve seen that does a good job of describing how to make an upward offline technique work.  However, it still is a low-percentage technique for offlining in the first place–even though it LOOKS like it works really well in the video, it only looks good  because the gun is pointed so high in the first place that merely hunching the head down is sufficient to take it offline, and apparently no attacker ever pulls the gun downward by jerking the trigger.  (I’ll also note that the technique as taught piece-by-piece isn’t the technique the instructor uses at speed.)

Practicing versus a partner who is just holding the gun out is necessary in the beginning, as you need to practice the specifics of the technique in the beginning.  However, once that is solid, a GOOD instructor will have the students start training with increasing levels of resistance–and perhaps set up verbal interactions also.  However, since many schools/instructors don’t do this, many students are convinced that their techniques will work even if they have been taught poor technique.   As I said, if the guy teaching the technique won’t ever demonstrate it in a force-on-force situation where there is an actual consequence for failure (and gas AirSoft guns STING like you wouldn’t believe), then that’s a Bad Sign.

Force-on-force testing is a wonderful thing.  Failing a force-on-force test doesn’t automatically mean the technique is bad—nothing is foolproof, and you may well be doing it wrong.  However, if someone can easily shoot the instructor repeatedly, well…

….quit listening to that instructor.  He’s going to get you killed.